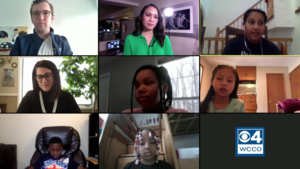 WCCO’s Christiane Cordero reflected with Prodeo scholars and assistant principal, Mary Barsness as VP Kamala Harris breaks through barriers. They all watched this moment in history, but from different perspectives.

MINNEAPOLIS (WCCO) — Wednesday’s inauguration was also historic, with the first female swearing in as Vice President. Kamala Harris, in November, assured America she would not be the last.

WCCO’s Christiane Cordero spoke with some local students looking to follow her footsteps in their own way, a promising bunch from Prodeo Academy as well as assistant principal, Mary Barsness. They all watched this moment in history, but from different perspectives.

“The fact that we’re going to be using the term Madame Vice President is something that’s really important to me as a 50-year-old woman,” Barsness said. “They will grow up knowing it is always achievable. I didn’t get to do that and they will.”

Some third- and sixth-graders hopped out of class for a minute to share their thoughts on this moment. It’s a designation that does more for optics than for politics right now. But today, these kids became the first generation to see part of themselves represented like never before.

“Finally to see like girls have their own thoughts and get to share it with the whole world,” sixth-grader Delina Gebremicael said.

“I think she’s a strong and sacrificing for others and helping others,” third-grader Kar Meh said.

“She’s strong like my mom, she has a heart, so I think she could do something for this world,” third-grader Isaiah Grayson said.

They were quick to share the things they want to see happen. Among them: no more hurting each other, a better country for people of color, and 9-year-old Kaniya Smith said she now wants to see the first female president.